You can find the source code of this connector here: TeneoFBconnector.zip.

These instructions assume your Teneo solution is published and that you know the Engine URL. Further you need a web container running on a JVM version 11 or higher and compatible with Jakarta EE 9.1 Web Profile (e.g. Tomcat v.10, WildFly v.23, GlassFish v.6) such that web applications installed therein are able to send HTTPS POST requests to the published Teneo engine and receive HTTPS POST requests from the Facebook Messenger Platform via its webhooks. Besides that, you need one or several Facebook business pages with a Facebook Messenger available there.

The description of the software

Teneo Facebook Messenger Connector is a Java web application. It can be deployed in any Java web container running on a JVM version 11 or higher and compatible with Jakarta EE 9.1 Web Profile (e.g. Tomcat v.10, WildFly v.23, GlassFish v.6). It should be deployed so it is able to send HTTPS POST requests to the published Teneo engine and receive HTTPS POST requests from the Facebook Messenger Platform via its webhooks.

One instance of this connector can serve multiple Facebook business pages and multiple users on each page talking to one Teneo engine instance simultaneously.

When a user opens Facebook Messenger on a given Facebook page, the user is assigned a page-scoped ID (PSID) which is unique for the given user on the given page. The user is then identified by this PSID during his/her interactions with the messenger so this PSID is present in the webhook requests triggered by the user's actions (submitting an input, clicking a button etc) and can be used to display messages to the user via Send API. The connector itself uses this PSID as a session identifier. The connector has its own internal session management mechanism instead of the one provided by the Java web container. This is motivated by the specifics of the Facebook Messenger webhook implementation which is not directly compatible with any of the typical Java web app session identification mechanisms such as e.g. session cookies and URL rewriting.

When the user submits a message via Facebook Messenger connected to a Teneo engine, Facebook Messenger's webhook sends a POST request to the connector. This request contains the user's PSID and the submitted message itself, among other information. The connector receives this request via its webhook servlet, com.artificialsolutions.asolfbconnector.webapp.servlets.Webhook, and parses it to "understand" what kind fo webhook sent the data. In this version of the connector, messages and messaging_postbacks are the only ones implemented. If you want to process more webhooks, you should add the corresponding logic in com.artificialsolutions.asolfbconnector.webapp.servlets.Webhook.doPost(). If the webhook has been parsed successfully, the connector invokes the singleton instance of the Facebook-Teneo bridge, com.artificialsolutions.asolfbconnector.bridge.FacebookTeneoBridge, which handles the custom sessions including their timeout. The connector creates a new (or grabs an existing) session identified via the user's PSID.

The functioning of the connector is illustrated in the following functional diagram: 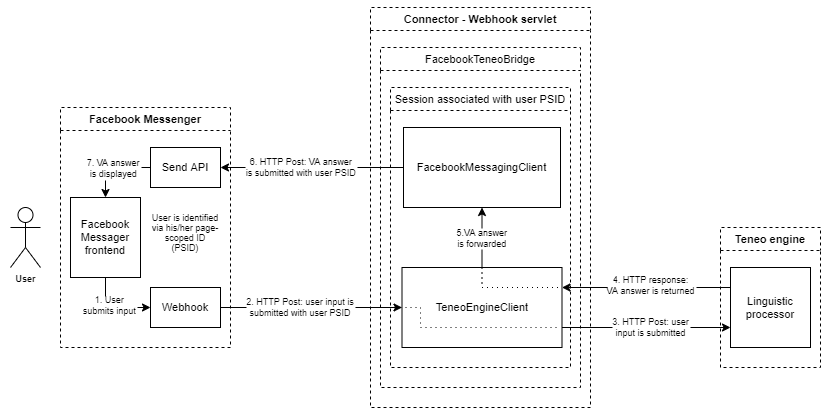 The sequence of the steps depicted in the diagram is as follows:

An example configuration file asolfbconnector.properties is supplied with this webapp.

The compilation and packaging goals for development :

In this case, the compiled webapp is deployed on a special embedded Tomcat via the Cargo Maven plugin. It allows you to run and test the application straight away. In the folder target/site/apidocs it will generate the javadoc of the application.

The compilation and packaging goals for production :

Regarding the logger configuration, in order to test the application it is highly recommended to have it on the debug or trace level. If you have it on those sensitivity levels, it might log some PII, like user PSIDs, user inputs etc. Thus it should be set to have less sensitivity in production (info or warn for example).

In Facebook developers create an application as "Messenger", configure its endpoint as [yourAsolfbconnectorURL]/webhook (i.e., the endpoint of your hosted asolfbconnector connector webapp plus the /webhook path) and subscribe it for messages and messaging_postbacks webhooks. When you configure the "Messenger" part, you will have a chance to get the application's app secret to be used in the facebook.application.appSecret property and generate the page access token, which you will need to configure the facebook.pageIdToAccessToken property of your connector webapp.

The current version of the Teneo Facebook Connector processes requests from the "messages" and "messaging_postbacks" webhooks of the Facebook Messaging platform and passes them over to Teneo engine as HTTPS POST requests. These requests contain the following parameters:

Additionally they can also contain the following request parameter:

It may also contain the following parameters:

Teneo engine normally returns a text as its answer. This text is then displayed in Facebook Messenger to the user. If content other than simple text should be returned, e.g. buttons, templates etc, this content should be placed in the output parameter facebookMessage. It should be a well formed stringified JSON representing a value of Facebook's message property as per Send API Message.