The Dialog Tester is a regression testing tool that enables automatic testing of user dialogs against a published virtual assistant.
This document describes how to use Dialog Tester to test entire simulated dialogs in the maintenance phase of a Teneo solution. While Teneo Studio's integrated Auto-test is a tool meant mainly for intent recognition testing on Triggers, Dialog Tester allows for the testing of the following items:

The Teneo solution must declare a global variable called zOutputIds. This can be done with the following steps:

One of the functions of Dialog Tester is to compare the expected ID of an output node with the ID of the output node that was actually received.
In order for ID comparison to work, output IDs must be sent as output parameters from the Teneo solution. To achieve this, the solution needs to include the following lines in the Post-Processing global script:

The input file for the Dialog Tester is an Excel file with the following structure:

Each of the parameters in the image above are explained as follows:

Output IDs received from the published solution are compared with the expected IDs by literal string matching. For this reason, the comparison is sensitive to white spaces (at the start and end of strings, or between concatenated IDs). The expected IDs must match the received IDs exactly for the Dialog Tester to return a match.

In this case, the received and expected answers are identical, which would give a correct result. Note that invisible characters, such as whitespace, must also match. Therefore, ensure there are no leading or trailing whitespaces present in the expected answer column.

Text comparison can also be done in a less strict manner, by using the following three operators:

The Dialog Tester jar file accepts either 3 or 4 command parameters. These are outlined below:

Sample command to run the jar,

This command will run the Dialog Tester (v3.5) to test the chatbot with the engine URL https://studio-dev.server_name.com/bot_name with the 1st to the 10th input in the input file DT[project_name].xlsx_ in the same folder and save the result in DT[project_name].html_ in the folder 'results'. There will be a pause of 1 second between each input.

If you are interested in the whole input file, please remove the last line with -g 1:10 -p 1000 and run the following command,

Engine URL of the chatbot

Teneo Developers users can easily find the Engine URL of the chatbot from the bots panel of the Team Console: 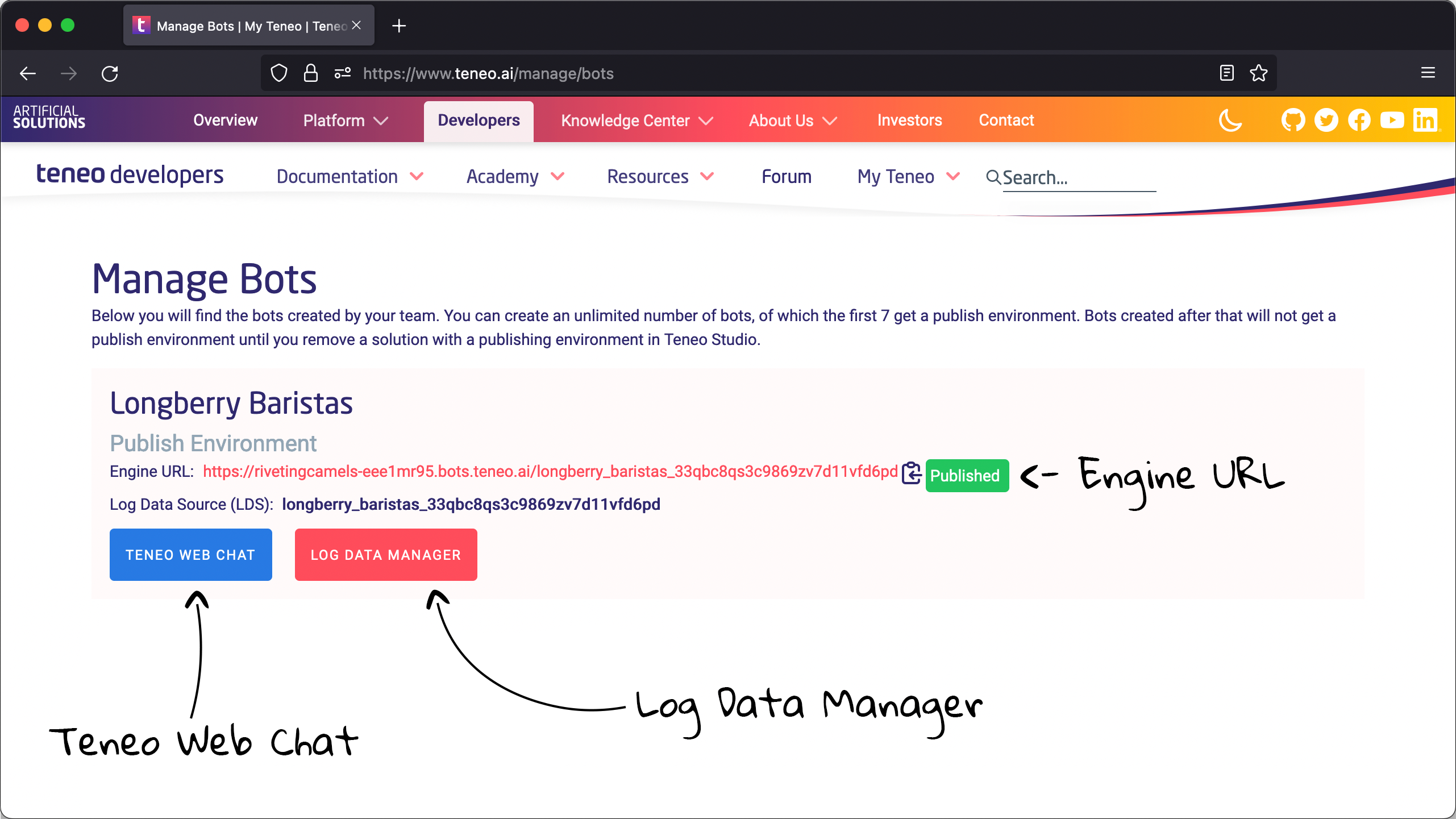 For users who did not access Teneo Studio via Teneo Developers, the target URL from the Publish panel of your solution is usually the Engine URL of the chatbot. If this URL does not work, please contact Artificial Solutions. We can help you to figure out the correct Engine URL. 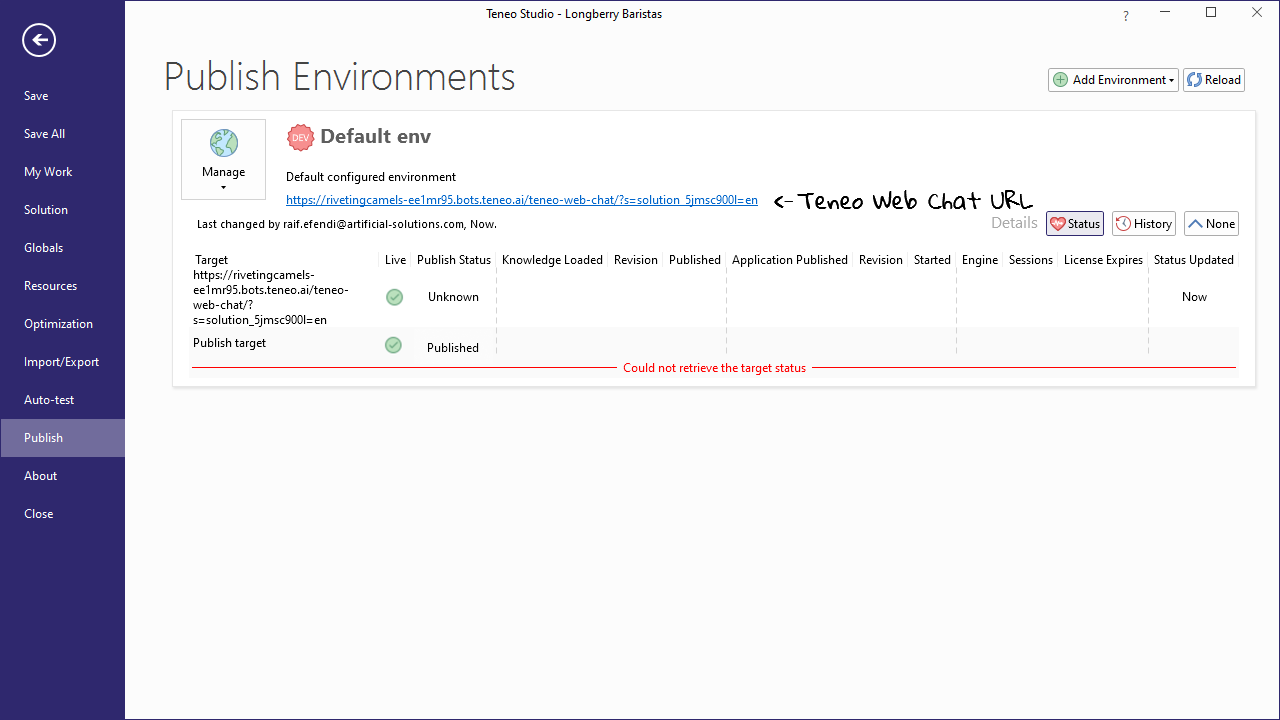 As the command to run the Dialog Tester jar file is quite long, a better practice is running it via batch files, which allows you to run various Dialog Testers with one click and move the old results to a specific folder to avoid being replaced by the new Dialog Tester outputs.

The file and folder structure

To maintain only one set of batch files and one set of Dialog Tester Excel input files, while also allowing these to be run against separate servers, we need a folder structure that lets us distinguish the Dialog Tester output files based on the test server (DEV or QA).

With this folder structure in place, we can parametrize the batch files to point to either the DEV or QA server when running the Dialog Tester and to put the corresponding output files in either the /dev or /qa folders. The old Dialog Tester HTML files are meant to be kept for reference purposes, but can be skipped depending on project needs (as can the even older files in the /z_old subfolder).

The individual batch files are set up so that if they are simply double clicked, they will run against the DEV server by default. This is done so as to make it easy to run only a single batch file for testing a specific area against the DEV server. This is achieved by using a variable for the following part in the solution URL (shown in bold text):

The individual batch files can run with an optional input parameter (if the parameter is missing, the default is to run against the DEV server, as mentioned above). It is assumed that this parameter value corresponds to the server, as shown above.

The two examples below will run the same batch file, with the same Excel input file, against the DEV and the QA environments, respectively. The files are run from the Windows command line.

The code below shows a simple case of individual batch files, where the server type (DEV or QA) corresponds to the folder names. Each line of code is commented on in the numbered steps below (except linesbeginning with :: which is a batch file comment).

The example below contains all the necessary logic to carry out all these steps. If the user enters any other value than DEV or QA, the code will prompt for the server again. The final line in the batch file shows the call to one of the individual batch files.

Check-list before running the batch file

The following elements should be checked as the Dialog Tester batch files are prepared:

The picture below shows the resulting HTML file for a test scenario with four user inputs. 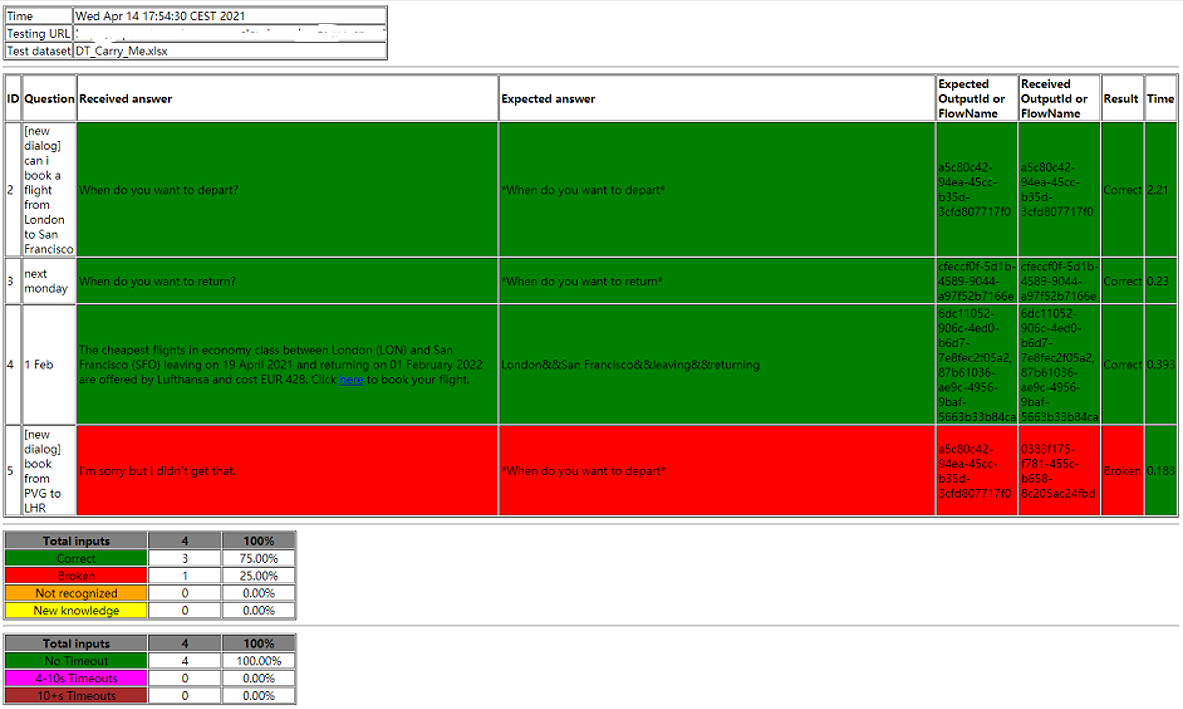 It shows that Dialog Tester reports results in four tables. The first table contains the date and time when the test was run, the virtual assistant URL against which it was run, and the name of the input file.

The second table contains the actual results, per user input. The background color highlights the results and the text or output IDs columns, or all four, depending on whether the user chose to compare actual virtual assistant answer texts, their IDs, or a mixture of the two, respectively.

A third table reports the overall results for the test. In this example, both user inputs received the expected answer from the virtual assistant. The percentage of correct answers is calculated as the share of Correct (green) inputs in relation to the total number of inputs.

A fourth table reports any delays in the solution response time. In the example above, the virtual assistant responses were returned with no timeouts or delays.

The Dialog Tester can be found and downloaded here: dialogue-tester-3.5.5-jar-with-dependencies