The Bulk Import feature of Teneo Studio is a longed-for revolution allowing users to create language objects, entities, or Question and Answer (Q and A) pairs outside Teneo Studio and later import them into a solution. With the Bulk Import feature, users of Teneo Studio can import a set of language objects, entities, or Q and A pairs in a quick and simple way, just by browsing for a file and selecting it. The Bulk Import format is flexible and powerful when it comes to adding information directly in the file before importing; for example, it allows users to easily add flow names, answer texts, multiple triggers, positive examples, variables and values, language object conditions, and entity entries with string and/or script variables and values, and it even allows users to specify the folder location.

Bulk Import works with the csv (comma delimited) file format. These files can for example be created using Excel (or any other compatible format) to later be saved as .csv. Encoding in UTF-8 and UTF-8-BOM is supported.

The Bulk Import button can found in the Solution view in Teneo Studio. It is located in the the Home tab:

Teneo Studio performs a series of checks to validate the file to be imported; if the validation fails, the import is cancelled, and an error message is displayed, informing the user about the issues encountered in the file. 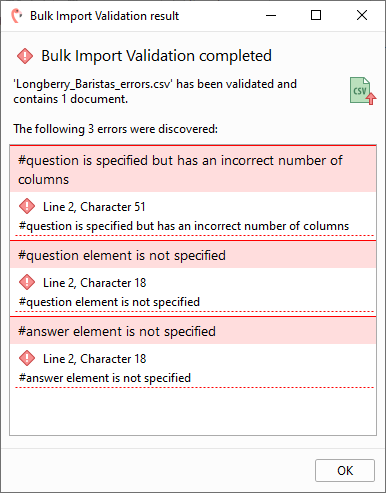 When hovering over any of the errors with the mouse, more information related to the encountered error is displayed: 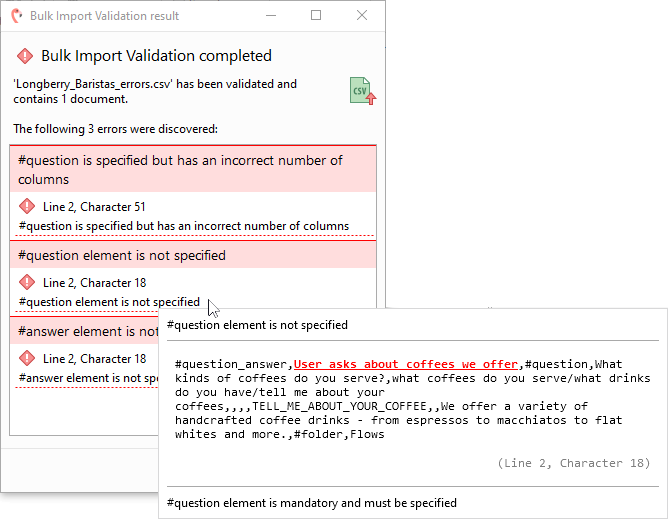 The validation process only verifies the format of the csv file and that all mandatory fields are added correctly; it doesn’t check any other aspect, such as the condition syntax, and it is therefore recommended to always check the condition syntax after an import has finished.

When creating the .csv file with a text editor or similar, double quotes must be escaped with an extra double quote. In addition, the entire field must be double quoted. See examples below.

The following tags may also be included, but are optional:

This example imports a language object in its simplest form: #language_object,HAPPY.ADJ.LEX, , ,happy/happier/happiest

The #folder tag is optional, but when used it needs a mandatory field specifying the relative folder path. If the folder doesn’t exist in the solution, it will be created when performing the bulk import. When importing a file into the solution root, the folder tag is mandatory. The optional #variables and #nlu_variables tags are used for adding variables and NLU variables to a language object. Multiple variables can be added by simply adding additional name and value pairs.

To Bulk Import entities to a Teneo Studio solution, the file can contain the following tags and fields:

Note the mandatory fields; an entity always needs a name and an entry.

The following is an example of a bulk import file with an entity in its simplest format: #entity,AIRPORTS,#entry,Arlanda

Q and A rules

When performing a Bulk Import of Q and A pairs, Teneo Studio will by default create Machine Learning Class Intent Triggers (Class triggers) unless specific information related to Language Condition Syntax Intent Triggers (Syntax triggers) is provided, this means that if the user wish to create a flow with one or more Syntax triggers, the order group or condition should be specified, while the Class Name should be left empty.

To import flows of the type Question and Answer pairs, the .csv file needs to contain the below fields, in the specified order:

Note: to specify the last optional field, the preceding fields must be specified too, even if they are left empty. For example, to specify only a class name after a question tag, we might use something like the following example: #question, , , , , ,MY_CLASS_NAME