This Java Connector connects Microsoft Teams to a Teneo-built Virtual Assistant (VA) so the Teams messenger acts as a frontend to the Teneo engine (the VA backend). This way, users can chat via Teams with a Teneo engine instead of a real person. One instance of this connector can serve multiple users talking to one published Teneo engine simultaneously.

Description of the software

Teneo Microsoft Teams Connector is a standalone Java console application (an executable .jar file). It communicates with Microsoft Bot API so no firewalls, etc., may prevent this communication.

The functioning of the connector is illustrated in the following diagram:

The sequence of the steps depicted in the diagram is as follows:

Your bot needs to be published and you need to know the Engine URL.

To compile the connector you need Java (JDK) version 17 or higher and Apache Maven.

To run the connector you need Java (JDK or JRE) version 17 or higher.

Setting up the connector

The application is configured in the application.properties file, to be found in the folder src\main\resources of the source code. The following configuration properties are implemented:

Regarding the logger configuration (the file log4j2.json in the folder src\main\resources of the source code), in order to test the application it is highly recommended to have it on the debug or trace level. If you have it on those sensitivity levels, it might log some PII, like user BSIDs, user inputs, etc. Thus it should be set to have less sensitivity in production (info or warn for example).

Go to the project folder in your console and execute the following:

Run the connector in your console

In your console, go to the folder you have your executable .jar file in (it will normally be target inside your project folder and the executable will be something like asolteamsconnector-1.0.0.jar) and execute it:

It sets up a service available via HTTP on your local host on the port specified in the application's configuration file. Its URL address might look something like http://localhost:3978 or similar. Microsoft Azure should be able to access that service via HTTPS so you have to make it publicly accessible. For demo or testing purposes you can use ngrok to create a public URL for a service running on your local host.

The requests received by Teneo engine contain the following parameters:

Additionally, the request will contain all the parameters/values available via the com.microsoft.bot.schema.Activity.getValue() provided this call returned a Map instance. Moreover, the user-related parameters configured in microsoft.graph.request.params will also be added in camel case (givenName instead of GivenName, city instead of City, etc).

Virtual Assistant normally returns a text as its answer. This text is then displayed in Teams to the user. If adaptive cards should be returned, they should be placed in the output parameter msbotframework as a well formed JSON. Splitting answers into 'bubbles' is also supported via the output parameter outputTextSegmentIndexes.

Setting up a bot in Azure

Access https://portal.azure.com and follow the instructions under "Create the resource" from steps 1-10 here to create a bot.

A channel is how your bot communicates with your application, in this case Microsoft Teams.

To open in Teams, hit the link under Actions, "Open in Teams". You will be prompted to allow Teams to be opened. Once you agree, you will see your bot in your Teams Chat panel.

Trying out your Bot

Send a message through Microsoft Teams and your bot will respond to your chat!

Simple Output Parameters make it easy to enrich your conversations with for example buttons, video's and cards in Microsoft Teams.

Microsoft Teams supports various rich message types via Adaptive card, allowing you to enrich your conversations with buttons, videos, cards, etc. There are different ways of adding these rich messages to outputs in Teneo Studio. This page focuses on an approach that makes it easy to add rich message types by adding a few helpful scripts to your solution. Once added, conversation designers in Studio can add rich messages by populating output parameters in a simplified and intuitive way. For example, attaching an image to an output using this approach is as simple as adding an output parameter with the URL of the image:

You can also find the source code on Github.

The JSON for each button option generated by Simple output parameter approach consists of three properties: • type - indicates the type of the action, always has the value Action.Submit • title - represents the button text, gets the value from the output parameter • data – contains the text and parameter to be sent to Teneo Engine when the button is clicked. The text has the same value as the Title, while the parameter has the key buttonChoice and value as the Title as well.

Due to the limitation of Adaptive Card, you can add at most 6 buttons in the same card. Using ShowCard action, we can support up to 11 buttons by folding the 6th to 11th button in a sub-card, for example: 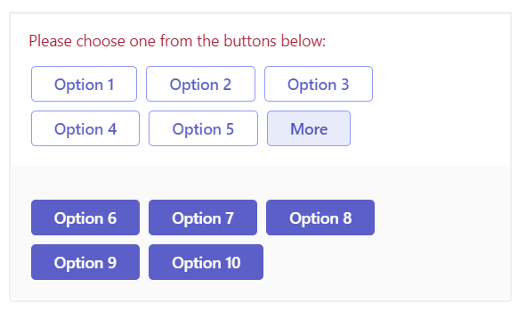 If your bot requires other properties of the buttons indicated in the Adaptive Card documentation, you should add the message type using the advanced approach.

The JSON for each link button consists of three properties: • type - indicates the type of the action, always has the value Action.OpenUrl • title - represents the link button title, gets the value from the output parameter • url - the URL that will be opened when the user clicks the button

Similar with the buttons, link buttons can carry other properties as well. If your bot requires additional information to be included in a linkbutton, you should add the message type using the advanced approach.

The JSON for the Text Block generated by Simple output parameter approach consists of three properties: • type - indicates the type of the message, always has the value TextBlock • text - represents the button text, gets the value from the output parameter • data – contains the text and parameter to be sent to Teneo Engine when the button is clicked. The text has the same value as the Title, while the parameter has the key buttonChoice and value as the Title as well.

Similar with the buttons, a Text Block can carry other properties as well. If you need to put additional information in the Text Block, you should add the message type using the advanced approach.

Similar with the buttons, an image can carry other properties as well. If you need to put additional information in an image, you should add the message type using the advanced approach.

Currently Media playback are not supported in Adaptive Cards in Teams, but you are still allowed to create the JSON for audio and video by Simple Output Parameters and wait until the media files are supported in Teams in the future.

To add a video or audio file, you need to add an output parameter named teams_video:

and assign the URL of the media file to the output parameter's value. Especially, for those videos in Online Video Platforms (e.g. Youtube), you need to change the parameter name to teams_webvideo. Like the image, you can also add an optional alternative text after the URL, with a pipe symbol ('|') as the separator. If you do not provide it, the alternative text will be "This is a media file" by default. The JSON for the media file generated by Simple output parameter approach consists of three properties:

Combination and order of the message types

To display a combined message in Teams containing various message types mentioned above, you can just add the corresponding output parameters to the same output node, with an additional parameter called teams_order (optional) to specify the order of the components.

The value of the teams_order parameter should contain the type names separated by comma in the order that you want them, for example:

The output parameter above indicates that image goes before text block within the body scope, while in the actions scope, buttons are shown before links. The supported type names in teams_order are:

As described in the Microsoft Bot Framework message type JSON specification, Teams looks for an output parameter msbotframework. The approach outlined on this page uses the MsTeamsHelper class which produces the correct JSON by converting the details provided in 'simple output parameters'. This simplified approach has some limitations. Some message types will be added with certain default values. For example, buttons will get the style 'default' and the send-back input will be the same as the title of the button.

In cases where more customization is needed, you can generate the JSON and populate the msbotframework output parameter using script nodes and flow variables. This gives you full control over the JSON that is added to the output parameter. 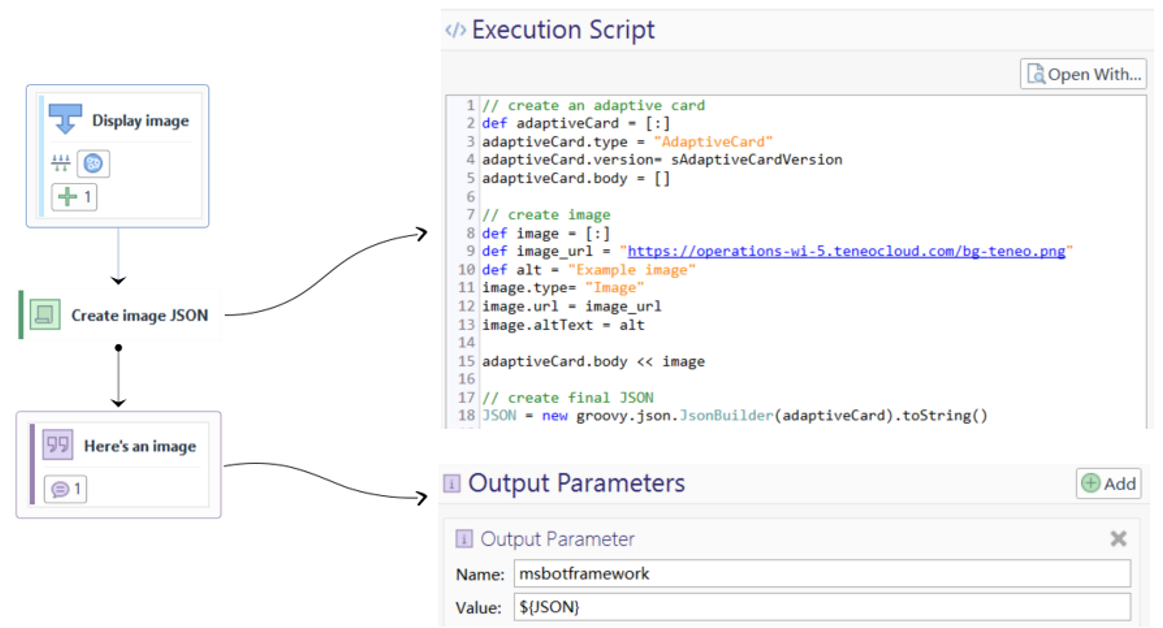 A step by step explanation of this approach can be found in 'How to populate output parameters' in the 'Build your bot' section.