Teneo supports scripting in two different levels, Global and Flow. On this page, you will understand more about the two levels and where to use which.

Global scripts are created and managed at the solution level. In the main solution window, click the 'Solution' tab, then choose 'Globals' on the left and choose the 'Scripts' tab. There, you will find multiple fields where you can add your scripts. Where you add your script not only determines when it is executed but also which data your script can access. There are two "levels": Session and Engine. 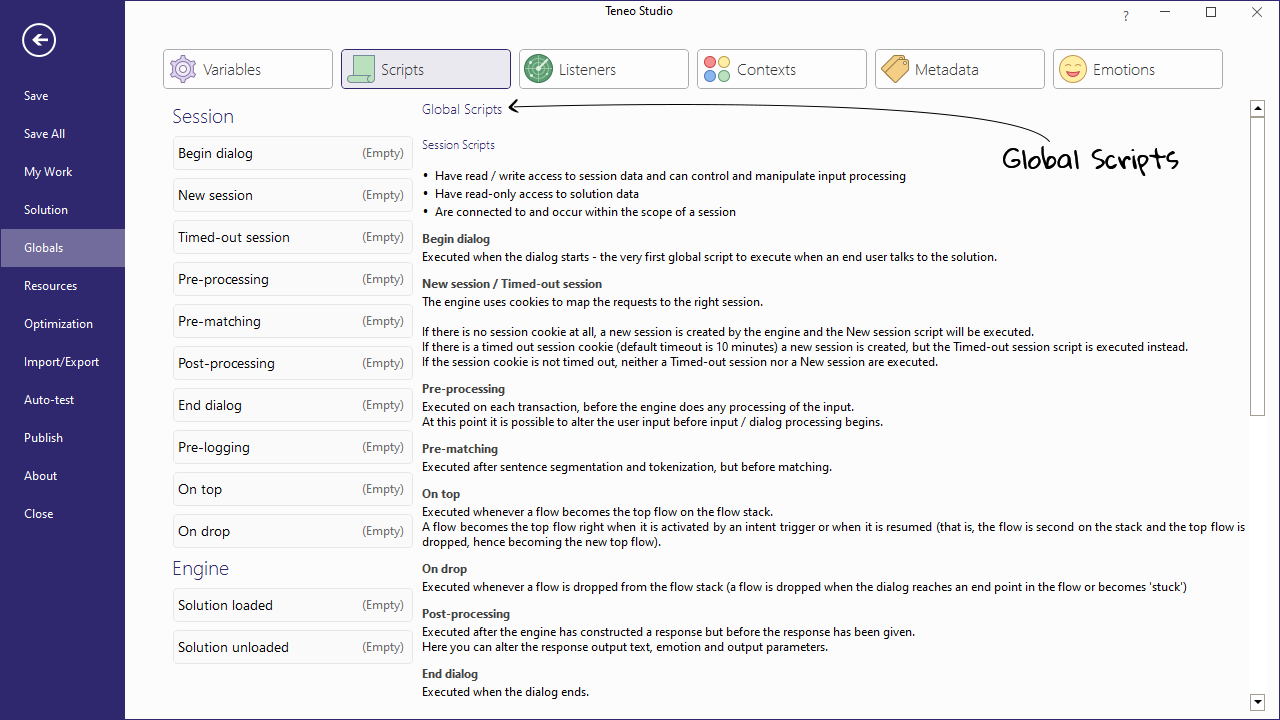 Session scripts can be executed at various moments in a session. These scripts have read and write access to session data (like global variables or the input of the user). They are connected to a particular session.

Scripts here will be performed once, at the start of each session. This script is commonly used to perform tasks that need to happen at the beginning of each session. For example, you might use this script to check if a certain parameter was included in the first request.

Depending on how this session began, the next script to execute will be either the 'New session' script or the 'Timed-out' session script.

This script runs following the 'Begin Dialog' script, but only if the request did not contain session a session ID. The absence of a session ID in the request tells the engine it should start a new session and execute this script. This script is not commonly used. You should only use it if you explicitly want it to only run at the start of a new clean session.

This script runs following the 'Begin Dialog' script, but only if the request did contain a session ID but the corresponding session was expired or is unknown. In this case, the engine will assume the session was timed out. The engine will start a new session and execute the 'Timed-out session' script. You should only use this script if you explicitly want it to only be executed for timed out or resumed sessions.

As previously stated, at the start of a session, the engine will always run the 'Begin Dialog' script and then either run the 'New session' script or the 'Timed-out session' script.

More details on sessions can be found in the Session Management paragraph in the 'Deploy your bot' section.

The 'Pre-processing' script is executed on each transaction, before the engine does any processing of the input. This means you can manipulate the user input string before it is tested against flow triggers or transitions. A more common use of the 'Pre-processing' script is to access other elements of the incoming HTTP request. For example, it is very commonly used to store values of URL parameters in global variables:

Scripts here are also executed on each transaction. They are run before the engine tests the user input against flow triggers or transitions, but after the sentences in the user input are separated for processing (sentence segmentation) and after the input is separated into words (tokenization). This script is not commonly used.

'Post-processing' scripts are executed after your solution has created a response, and consist of the output text, output URL, emotion, and output parameters. It is commonly used to run scripts that depend on the results of the flow processing, right before the final response is returned. It can also be used to change the response data. For example:

Scripts here will be performed once, at the end of each session. They could, for example, be used to write session details to an external system or to close database connections.

The 'Pre-logging' script is executed when the dialog has ended, but before the dialog been logged in Inquire. Therefore the script can both see and modify the content captured during the session before it has actually been logged.
One use-case is to anonymize names, to either remove it or replace it with a common pseudonym like 'Jane Doe'. For example in the script below, we change the value in Lib_sUserFirstName, which stores the users first name, to Jane:

'On-top scripts' will be executed whenever a flow becomes the top flow on the flow stack (either by being triggered or by regaining the top position after being interrupted by the triggering of another flow).

These scripts will be executed whenever a flow is finished and the task is removed.

Engine scripts are only executed when a solution is loaded by the engine (typically when the engine is started) or when a solution is unloaded (typically when the engine is stopped). These scripts are not connected to a particular session. This means you can't directly use session-specific data (like global variables) in these scripts. You can, however, pass on the EngineAccess and EngineEnvironment objects to the classes' methods defined here.

This script runs once when the solution is loaded into the engine's memory. It very commonly contains utility classes that are used throughout the solution. For example, you could add a class here that offers various string manipulation methods.

This script runs once directly before the solution is unloaded. It is not a commonly used script.

A diagram outlining the order in which Teneo executes scripts (and other tasks) can be found in the reference section: Input processing path.

To find the scripts, open a flow, click the 'Flows' tab, and select 'Scripts'.

The On top script of a flow will be executed whenever the particular flow becomes the top flow on the flow stack (either by being triggered or by regaining the top position after being interrupted by the triggering of another flow).

The On drop script of a flow will be executed when the flow has finished and is about to be dropped from the flow stack. It is commonly used to copy the value of a flow variable to a global variable with a limited life span:

Executing scripts in the middle of a flow

The On top and On drop scripts are executed when they reach the top of the flow stack or when dropped off the flow stack. You may, however, want to execute a script at a specific point in a flow. In that case, you can use a Script node. If it's a script you need to execute regularly in different flows, you can consider storing it in an Integration.